Pro Display XDR features a massive 32-inch Retina 6K display with gorgeous P3 wide and 10-bit color, an extreme 1,600 nits of peak brightness, an incredible 1,000,000:1 contrast ratio and a superwide viewing angle, all at a breakthrough price point. Together, the new Mac Pro and Pro Display XDR are the most powerful tools Apple has ever put in the hands of pro customers and will change pro workflows forever. 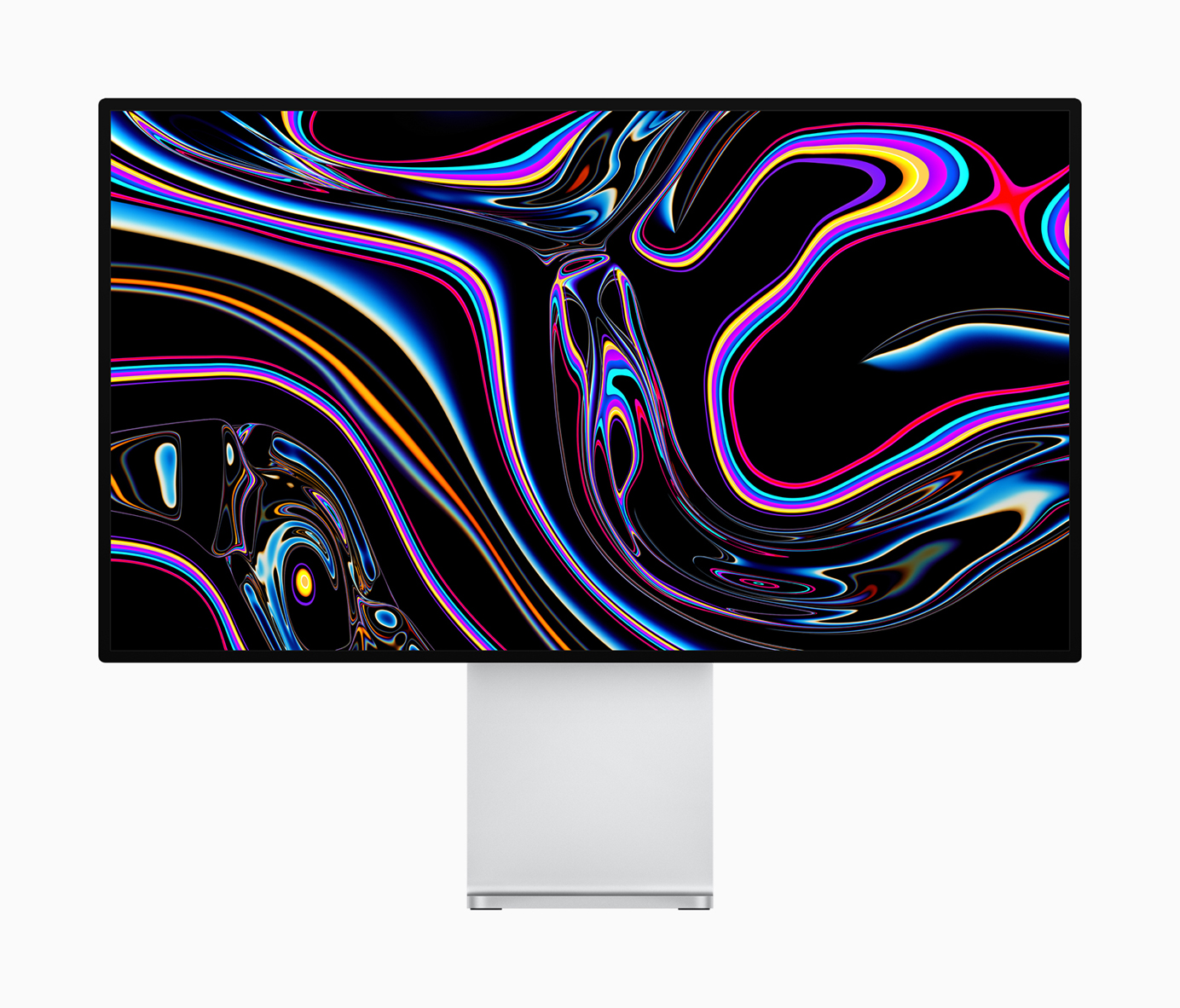 “We designed Mac Pro for users who require a modular system with extreme performance, expansion and configurability. With its powerful Xeon processors, massive memory capacity, groundbreaking GPU architecture, PCIe expansion, Afterburner accelerator card and jaw-dropping design, the new Mac Pro is a monster that will enable pros to do their life’s best work,” said Phil Schiller, Apple’s senior vice president of Worldwide Marketing. “Pro Display XDR is the world’s best pro display and the perfect companion to the all-new Mac Pro. With Retina 6K resolution, gorgeous color, extreme brightness and contrast ratio, and a highly functional design, Pro Display XDR delivers the most comprehensive set of features ever offered on any display at this price point.” – Apple 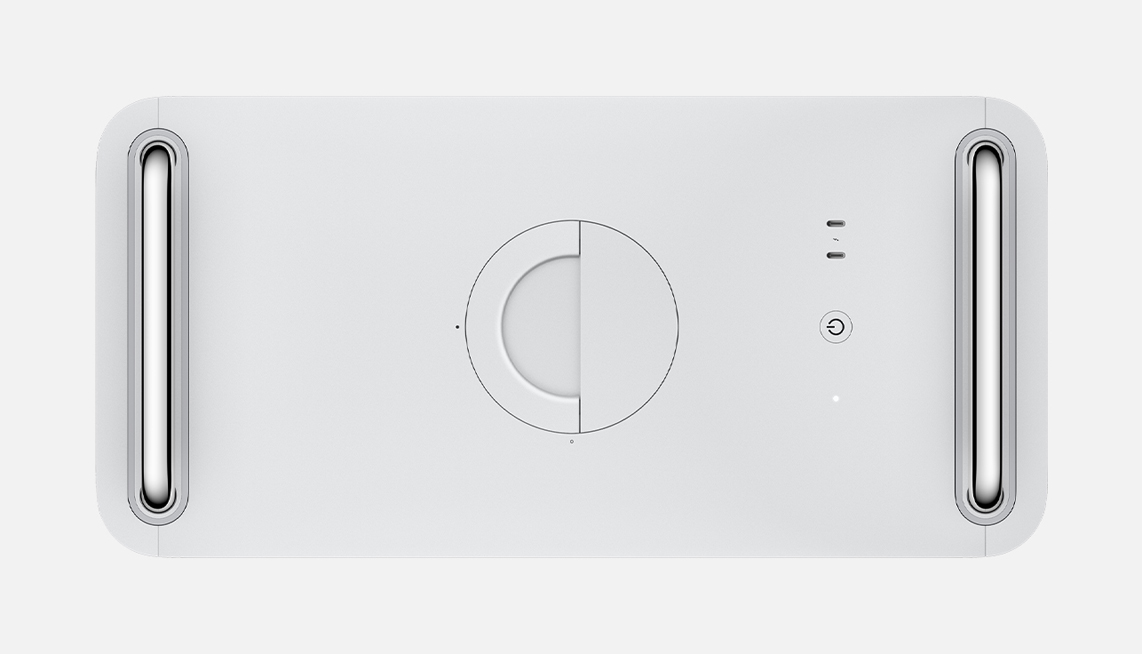 Designed for customers who demand the ultimate in CPU performance — for workflows like production rendering, playing hundreds of virtual instruments or simulating an app on a dozen iOS devices at once — Mac Pro features powerful Xeon processors up to 28 cores, with 64 PCI Express lanes for tremendous performance and massive bandwidth. It also provides over 300W of power along with a state-of-the-art thermal architecture to allow the processor to run fully unconstrained all the time.

For pros working with the largest projects, analyzing huge data sets or running multiple pro applications, Mac Pro provides enormous memory capacity to meet needs as they grow. Featuring a six-channel memory architecture and 12 physical DIMM slots, the new Mac Pro allows for a massive 1.5TB of memory, the most ever available in a Mac. And with eight PCI Express expansion slots, which is twice that of the previous-generation Mac Pro tower, pros can customize and expand their system in ways never before possible in a single workstation. 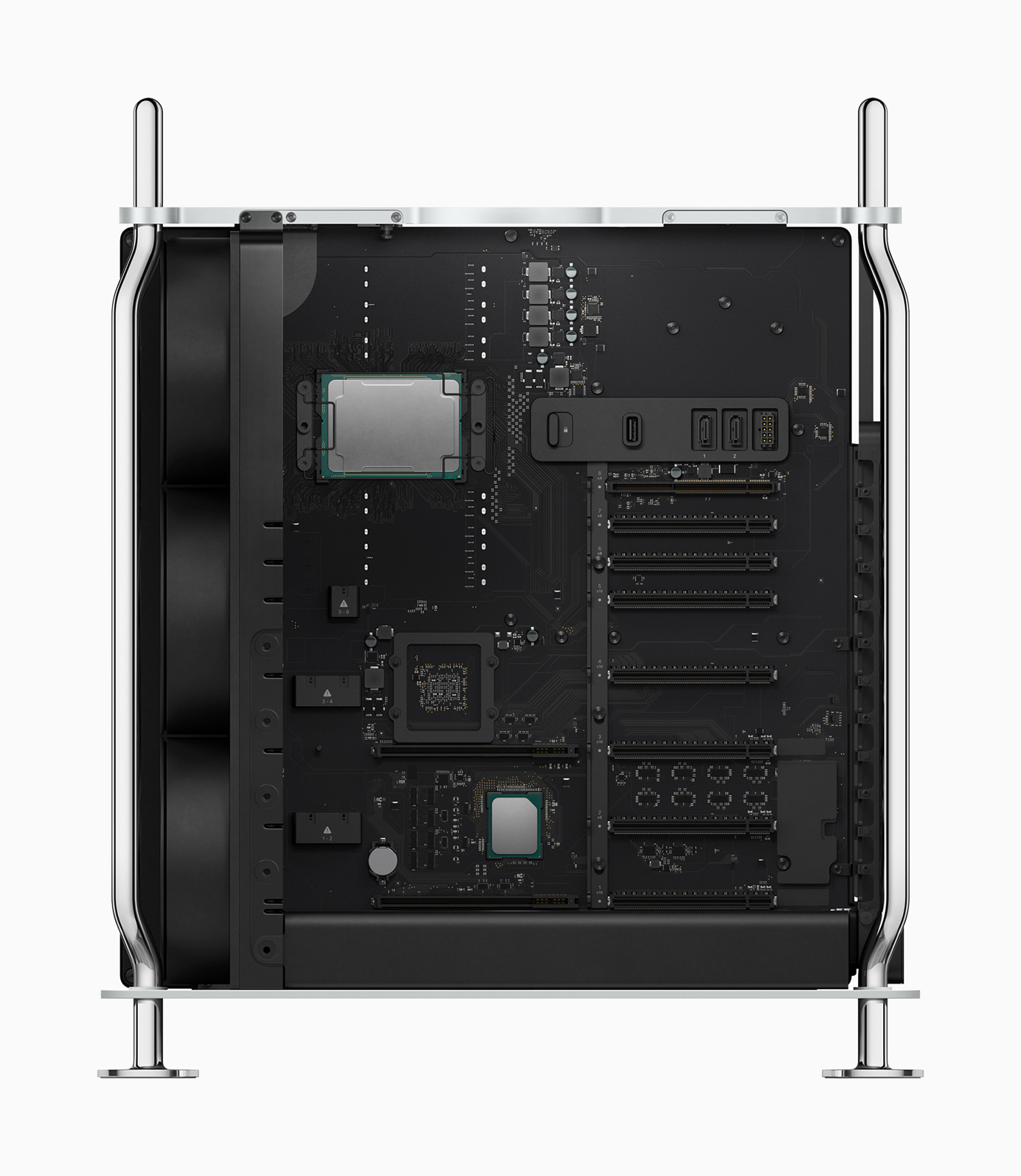 For pros animating 3D film assets, compositing 8K scenes and building complex 3D environments, graphics performance is more important than ever. That is why Mac Pro features the world’s most powerful graphics card and up to 56 teraflops of graphics performance in a single system. Its groundbreaking graphics expansion architecture, the Apple MPX Module, features Thunderbolt integration and over 500W of power, both firsts for any graphics card. And for super quiet operation, the MPX Module is cooled by the Mac Pro system thermals.

The new Mac Pro debuts Afterburner, featuring a programmable ASIC capable of decoding up to 6.3 billion pixels per second. With Afterburner, video editors using high-quality cameras that require the conversion of native file formats into proxies for easy editing can now use native formats right from the camera and decode up to three streams of 8K ProRes RAW video and 12 streams of 4K ProRes RAW video in real time,1 virtually eliminating proxy workflows. 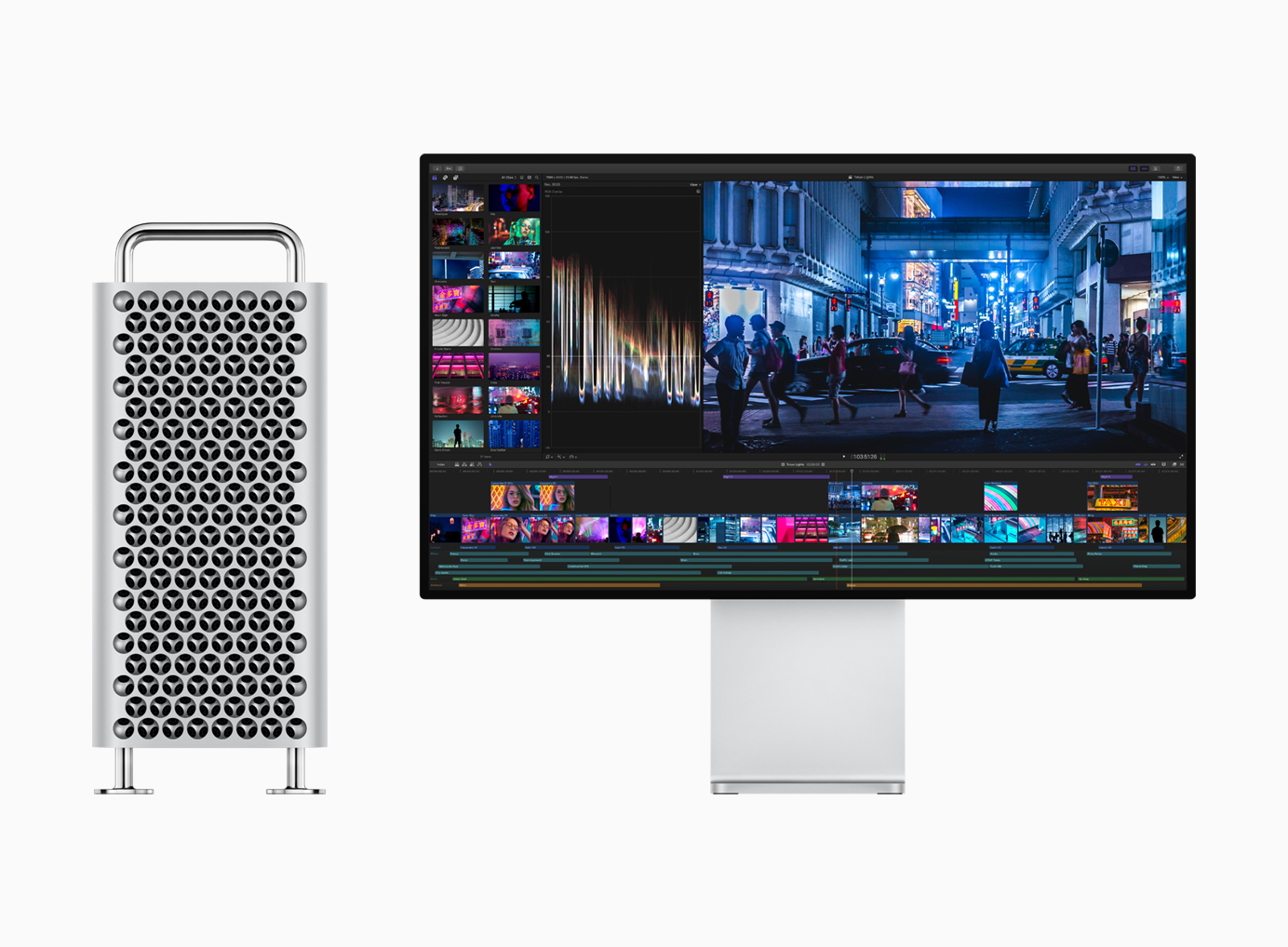 The design of the new Mac Pro starts with a stainless-steel space frame with an aluminum housing that lifts off for 360-degree access to the entire system. The frame provides a foundation for modularity and flexibility, and incorporates smooth handles for easily moving Mac Pro around the studio. The housing also features a stunning lattice pattern to maximize airflow and quiet operation. For customers who want to rack mount their Mac Pro in edit bays or machine rooms, an optimized version for rack deployment will be available this fall. 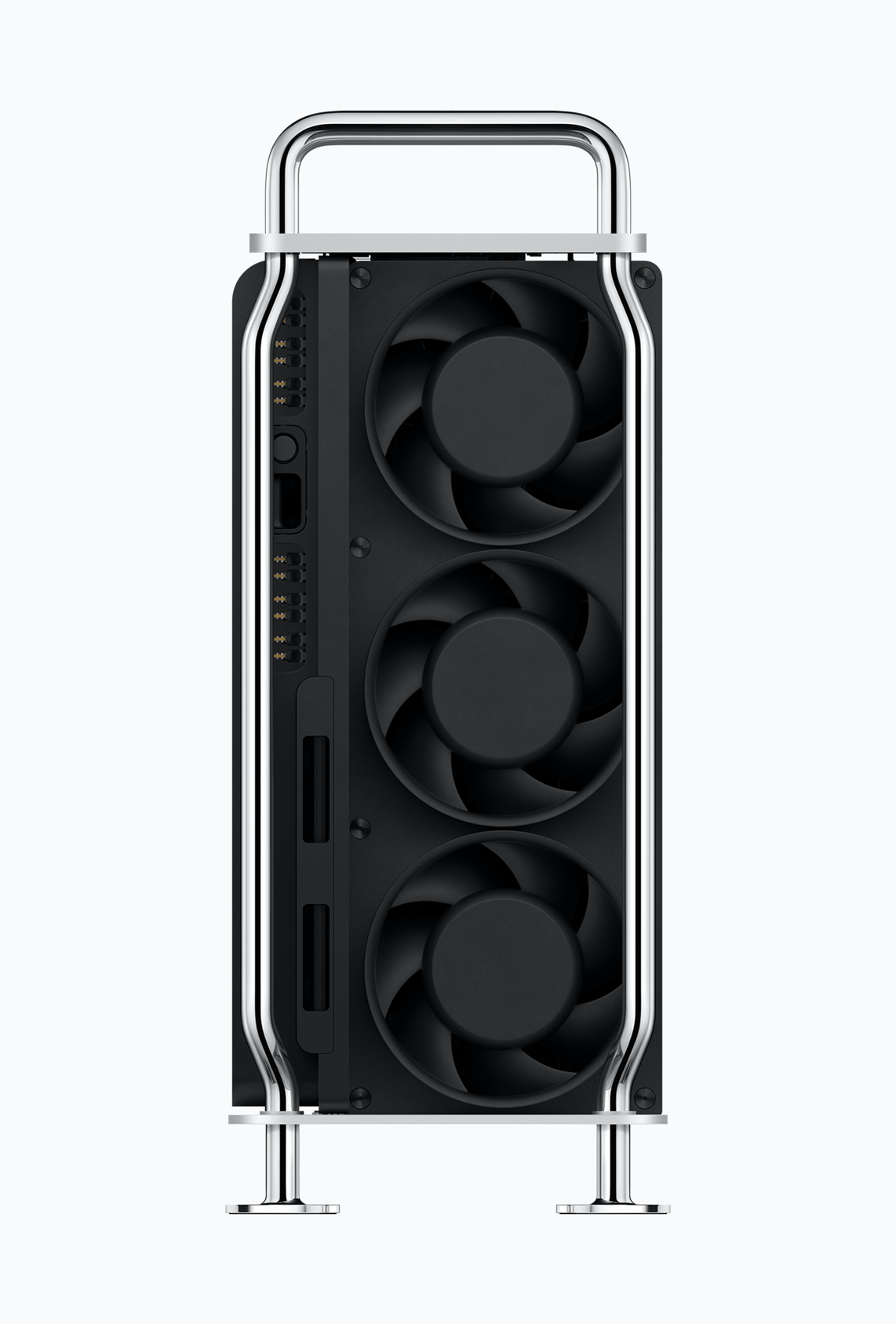 Performance to Transform the Pro Workflow

With up to 28 core Xeon processors, 56 teraflops of graphics performance and the groundbreaking Afterburner card, the new Mac Pro delivers performance that will transform pro workflows. A number of pro app developers are seeing amazing results that have never been possible in a single workstation. 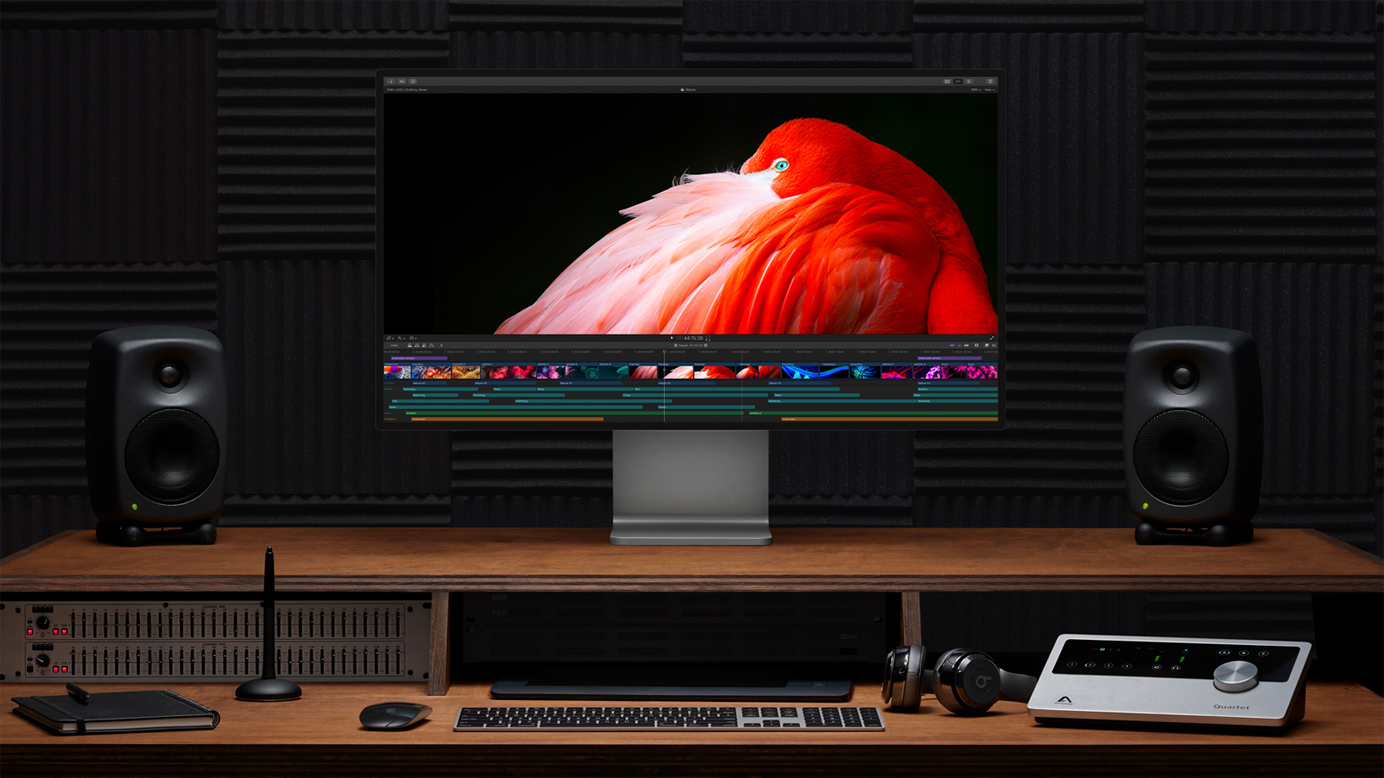 Flexible and Modular Design for the Way Pros Work

With edge-to-edge glass and narrow, 9-millimeter borders in a stunning, aluminum enclosure, Pro Display XDR features a highly functional and flexible design. The Pro Stand has an intricately engineered arm that perfectly counterbalances the display so it feels virtually weightless, allowing users to easily place it into position. The Pro Stand provides both tilt and height adjustment, and also allows Pro Display XDR to rotate into portrait mode, perfect for tasks like retouching photos, designing a web page or writing code. Easily removable, the Pro Stand quickly attaches and detaches so it is easy to take on location. For pros with unique mounting requirements, a VESA mount adapter is interchangeable with the Pro Stand. With a single Thunderbolt 3 cable, Pro Display XDR connects seamlessly to the Mac product line, including the new Mac Pro, which supports up to six displays for a breathtaking 120 million pixels.